Reikan FoCal - I Recommend It

Micro adjustment is a feature that that was developed a few years ago.  It is supposed to allow the user to fine tune exact focus when their camera is using a specific lens.   It seemed like an exciting feature when the ID Mark III was announced.  However, the 1D Mark III had so many more problems with focus that wasn't consistent that Micro adjustment was a waste of time.
Canon partially addressed the issue with the 1D Mark 1V by crippling the ability to focus on an exact spot.  When you tried to focus on the center, little invisible helper sensors assisted.  This is very frustrating when trying to photograph a bird that is surrounded by nearby branches.
The 5D Mark II also has the feature but once again Canon decided to reserve its finest autofocus for only the top tier cameras.  The future isn't bright, instead of improving the IDX focus, Canon has decided to not even try to focus at f8.
Canon continues to offer micro-focus as a feature.  They have been extremely vague about how it works or the best way to use it.  They have never offered any software to help make the process accurate and repeatable.  For example, you cannot bracket focus using the technique.
No consensus of a best micro adjustment technique has developed over the years.  The recommended distance for testing makes it extremely difficult to tell if you have the best focus or not.  It can take hours to find the correct adjustment for a single lens.  A cottage industry has been spawned to supply micro-adjustment tools - Lens Align has been the most popular.
When I tested the technique, I was not able to produce repeatable results.  I couldn't convince myself that moving from Canon's original settings world be correct.  What if I use +10 and the actual value normally falls at +1?   I could end up making a lens that cost thousands perform like the cheapest lens available.  I decided not to risk it - if focus is critical I may be able to stop down or use live view.
I discovered FoCal this week and paid for a copy.  It is on a PC that is tethered to the camera.  It automates setting the micro adjustment and compares a series of photos to the original setting.  It decides which image is best and adjusts the camera accordingly.
In the last 24 hours, I've tested 13 lenses.  Since zoom lens require more than one test, I've made 21 tests in all.  The reports that FoCal produces have proved to me that while the focus produced isn't totally consistent, overall adjustments can be made that will result in consistently sharper photos.  The results also convinced me that one of my lens needs professional help from Canon.  The reports are stored on my PC so I can compare results with any new tests I make.
I don't have an area long enough to test any lens 400mm and longer.  I cheated and tested the 400mm lenses a little closer.  I'll need to overcome this problem soon because I use the long glass on a regular basis.
The author of the software has a list of future new features that will make this software even more useful.  It isn't on the list but making this an Android App would be wonderful.
The ultimate test will be in the field.  My biggest adjustment is -16.  As of today, the 5D Mark II will use that setting.  I plan to test the setting manually to verify that -16 is actually better than 0 in the real world.
Posted by Allen Kurth at 4:07 PM No comments:

One of my personal projects this year is to document the recovery of wetlands of Fontenelle Forest.  I visited for the first time in 2012 and found the situation even worse than I remembered.  The green plants and animals were gone and the trees that were still standing were probably dead and about to fall.  The forest was ugly. 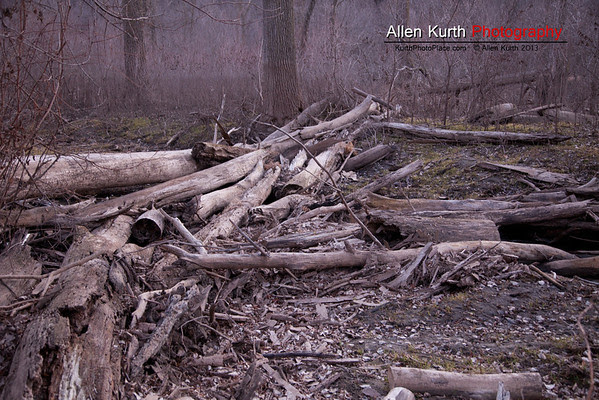 I returned to the wetlands in February during a snow storm.  What a difference.  The snow made me realize that the ugly was skin deep.  The healing has begun and the wetlands will soon shed the new coat of snow and the green shoots and leaves will return along with the birds and bees. 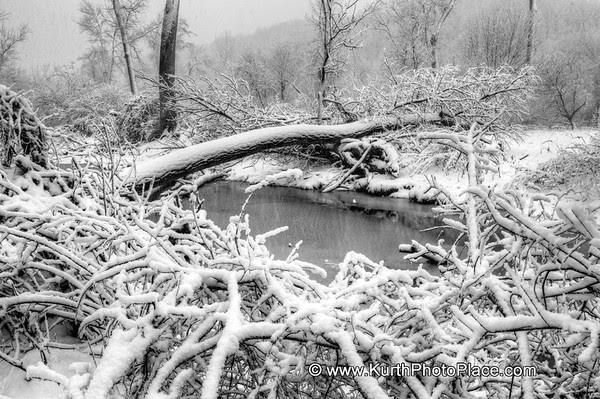 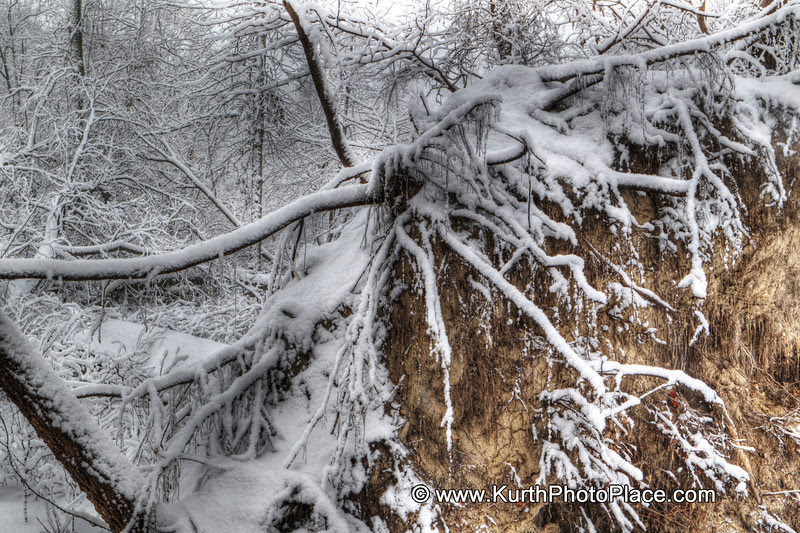 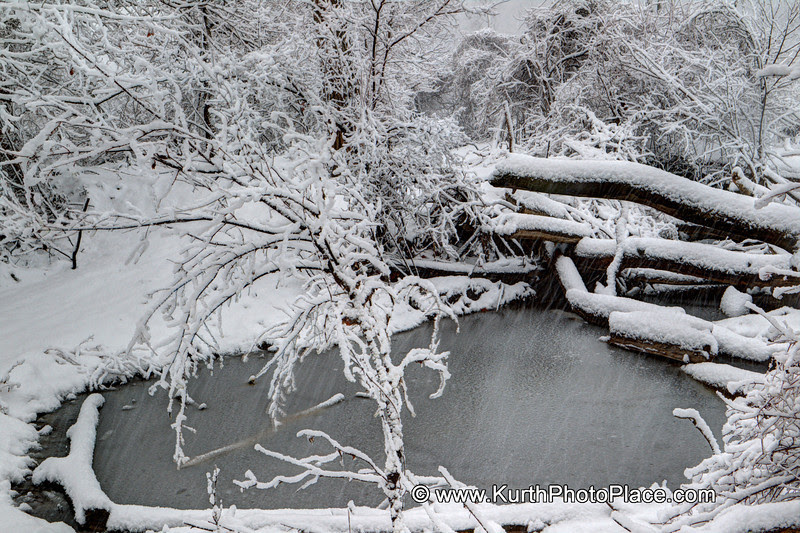 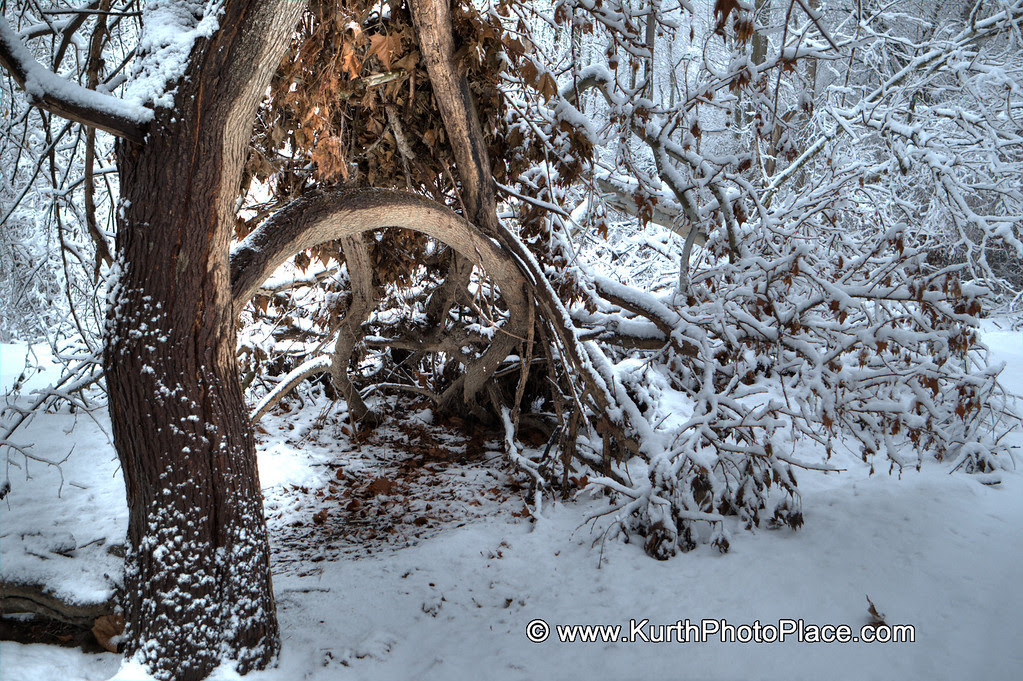 The forest was spooky during my visit.  The snow clinging to branches stresses the weakened limbs.  Creaks and groans surrounded me and branches crashed to the ground.
I planned to practice HDR (High Dynamic Range) photography this weekend.  I took 7 exposures of each of the photos above and merged them in PhotoShop or Photomatix.  The snow scenes were anything but high contrast but I did find that the technique helped retain some detail in the dark shadows on the trees.
Posted by Allen Kurth at 10:12 PM No comments:

I photographed some birds on my deck today. 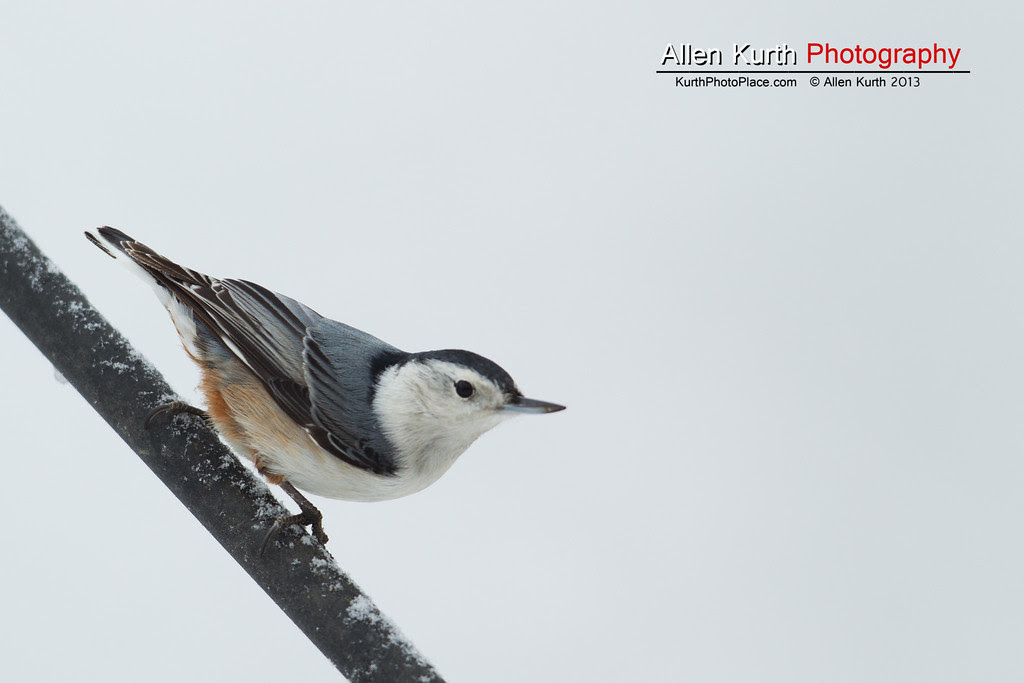 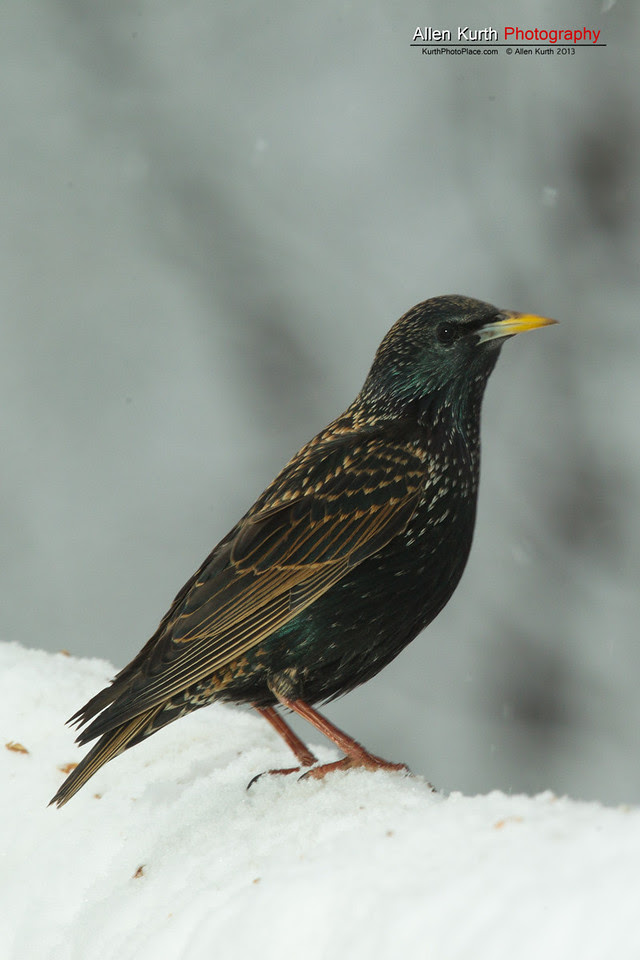 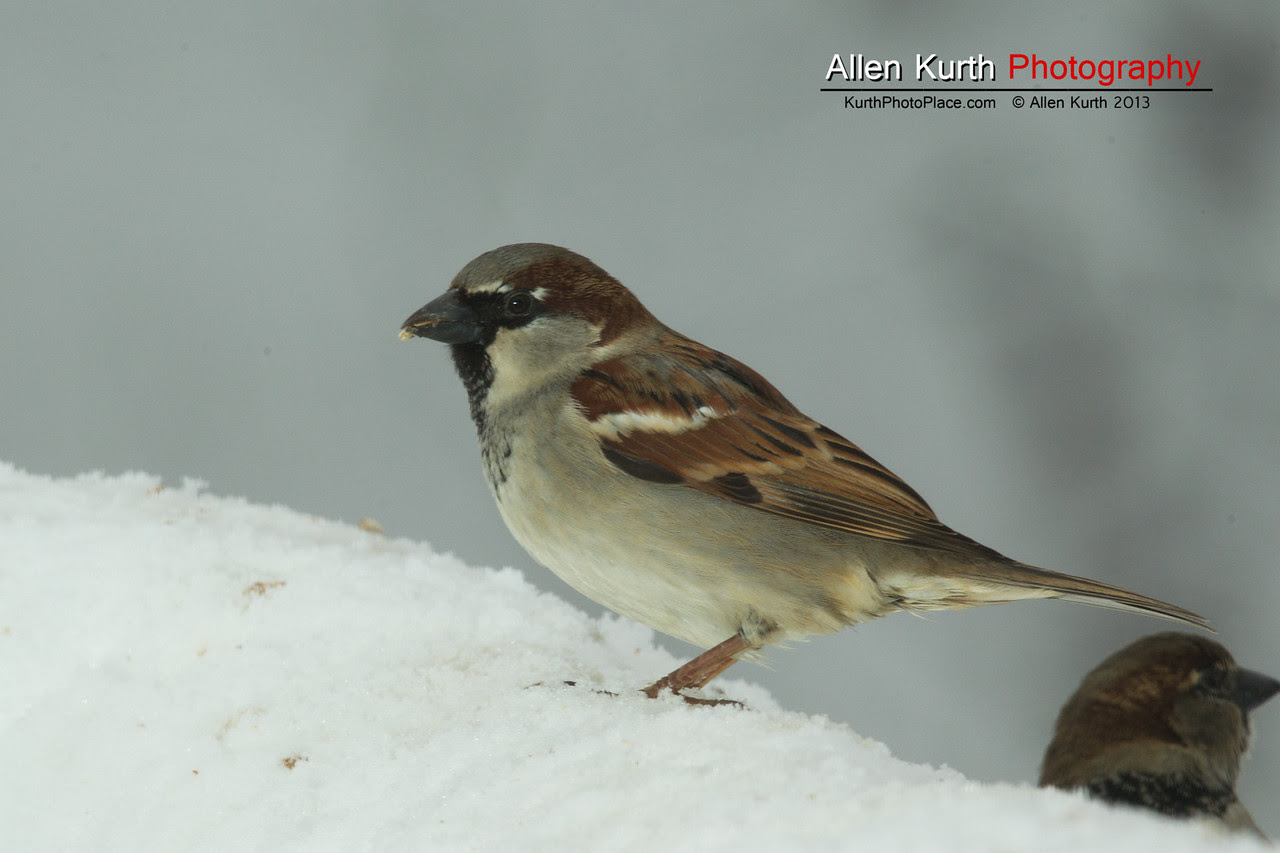 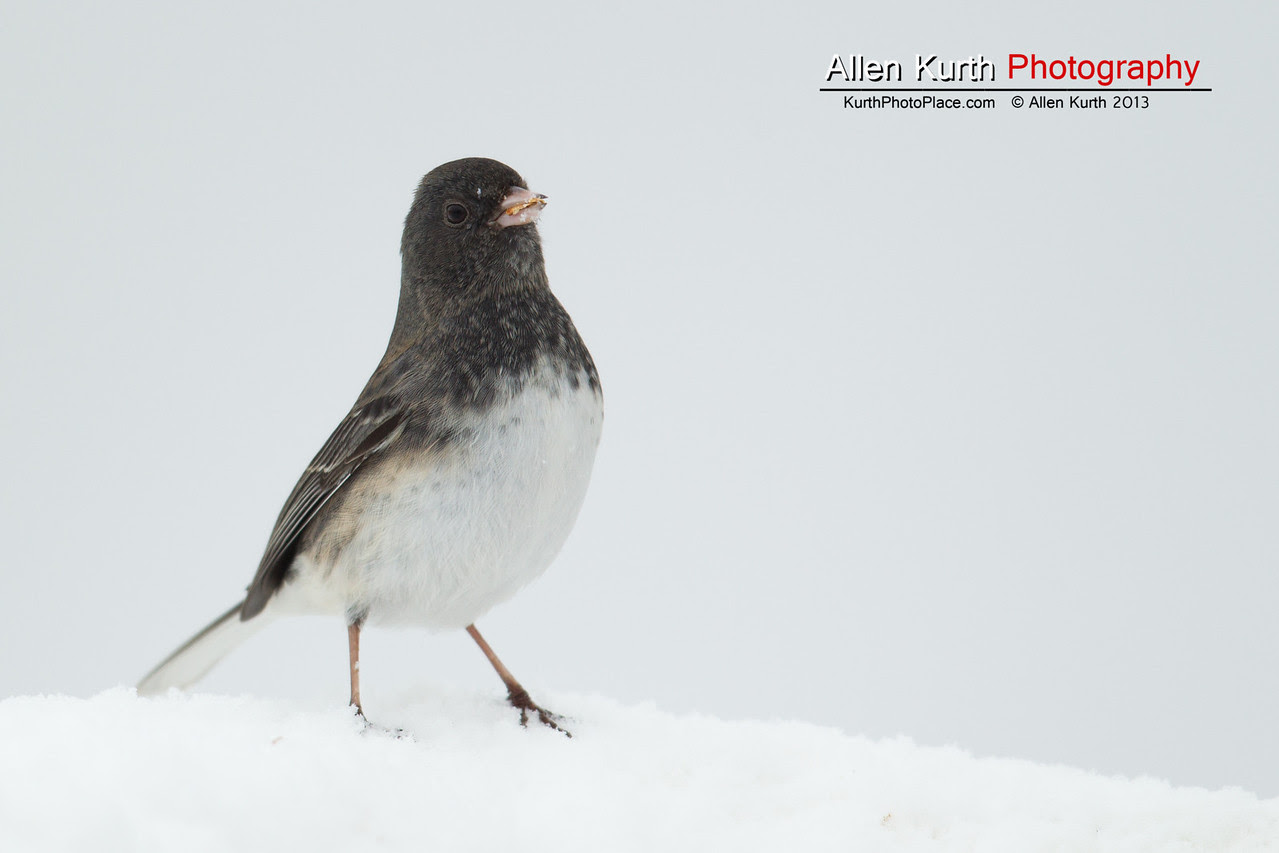 The groups of birds that visited the feeder scattered as soon as I appeared.  I tried a number of different approaches.  I started with a 600mm lens and moved to a 400mm lens.  I tried natural light and tried a flash fill (on camera  and radio controlled through a window).  I was outside for some and shooting through the window for others.

When I have another opportunity,  I plan to set up a blind on the deck.  I think I can sneak into it out of the birds field of view from my screened in porch.  My ultimate goal is to photograph the birds so that they appear to be somewhere other than by my feeders.
Posted by Allen Kurth at 7:37 PM No comments: 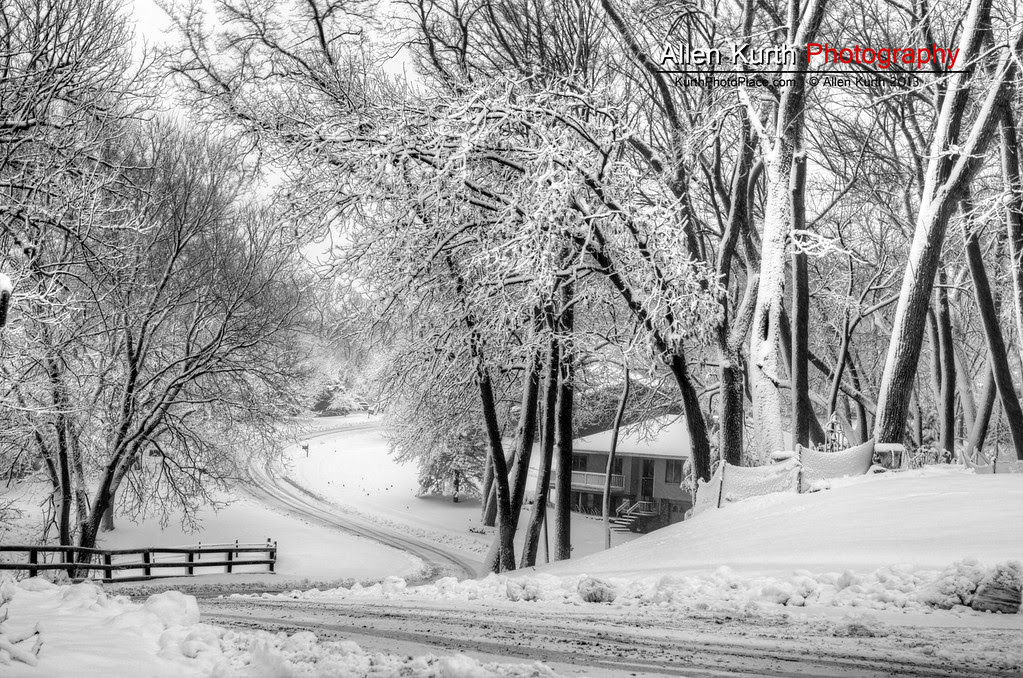 Nebraska isn't known for mild winters.  We have months of subzero weather with intermittent blizzards. This winter has been an exception - at least until yesterday.  Fourteen inches of snow were on the ground by the time the storm was over.  Still the transition was gentle - the snow fell so softly that it stuck to the branches and transformed the neighborhood into a winter wonderland.
Posted by Allen Kurth at 5:25 PM No comments: